Is there anyone still on Blogger?  I am wondering whether to restart my blog after years of absence due to RL building works (finally finished in September 2022!) and some other very inconvenient things. I have since retired so I have finally got time for miniatures and started with an inventory of things to do, like finishing the dollshouse I started in 1992! Yes 30 years ago!

Other plans include a proper roombox for the antiques shop that I made in cardboard filing boxes around 2016-7, and more pottery and more order in the chaos of my workroom...

The list for the dollshouse is very long, so I'm working on putting that into some kind of order, so it's a workable plan, starting with improving the lighting. I recently completed a William Morris rug for the diningroom, which could do with arts and crafts furniture. There are 2 completely unfinished rooms and that can't stay that way.  You get the idea! 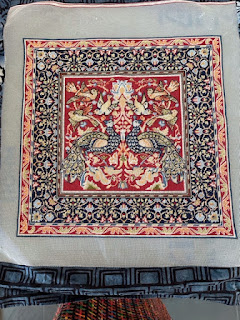 Posted by Idskesminis at 16:19 No comments:


My RL building project took considerably longer than expected (over 2 years, rather than the 3-5 months expected, I won't bore you with the details, but the house is now safe and sound and painted mostly) and I haven't really gotten back into miniatures, except for some embroidery and some small items with the dollshouse and miniatures club.  There are still some things to do, in particular the garden needs a lot of attention now that the weather is better, in the form of diggers, paving and recovering from builders ‘usage’.  The blue bags are a sign of that, although they have now gone and we are making progress. There are some nice plants in the border under the wisteria(photo from May19), they just need uh, uncovering/discovering? 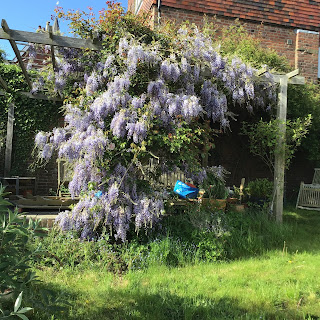 There have also been some other reasons why I haven’t been here for such a long time. Both my boys came back to live here after uni, one with his girlfriend, so the workroom wasn't a high priority.  Life has been generally hectic. But, I have decided that I am retiring towards the end of 2019 and I should then have more time for hobbies...

In the meantime I will be reacquainting myself with mini blogger land, and commenting, if I dare!

A very brief post.  I'm about to start a RL building project with at the end of it a warm, light work room and a lot of other boring stuff like windows, a roof and insulated floors/walls....

This is a photo of the last lot of pots I've made. I will definitely continue making pottery once I have my work room. September hopefully...

Has anyone seen the miniature potter's wheel that Jon Almeda has developed?

That should work even better than the full size wheel I have been working on, even if I have to get it to work on 240v... 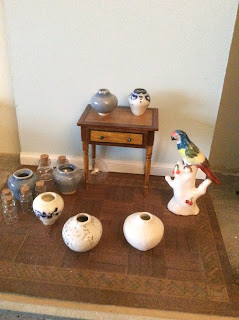 Hello everyone and especially Drora!

I'm still around and hope to post some new pottery soon.  In the mean time I do read blogs and comment every now and then!

Drora posted about her visit to a care home.  What a wonderful thing to do!  Nowadays they make all sorts of gadgets to help stroke victims. My mum had a beautifully made bookstand that allowed for turning the pages with one hand.

Although I tried to describe the tray (something like it probably exists somewhere to buy too) that's not so easy in a box where you can only see 2 lines at a time and I promised Drora to do a little drawing. It's sort of a combination of a glueing jig and a bench hook.

It's really just a small board (6-12mm thickness) of about A4 size with 2,5x2,5cm batons glued onto it. Chunky batons is good as that makes it easier to handle with one hand. It shouldn't be higher than about 3.5-4cm to be comfortable under a less mobile hand. As long as the bottom baton is long enough to stop it from sliding away on the table it should work with a bit of practice. You put the side baton on the same side the paralysed hand so they can put this hand on top to hold their work down.

Who knows it might work for your ladies too, Drora!

A little table and a bit of sunshine!

It has been so dreary and grey here that a bit of sunshine through the window caught on this little table seemed the perfect opportunity for this short post.

This is the table project I taught at our dollshouse club afternoons in January and February. No time for photos as there was also the AGM in February.  I'm hoping that most will bring their tables in either in March or April, just for some photos. This one is french polished and it will get a few more layers on the table top, but otherwise it's finished. 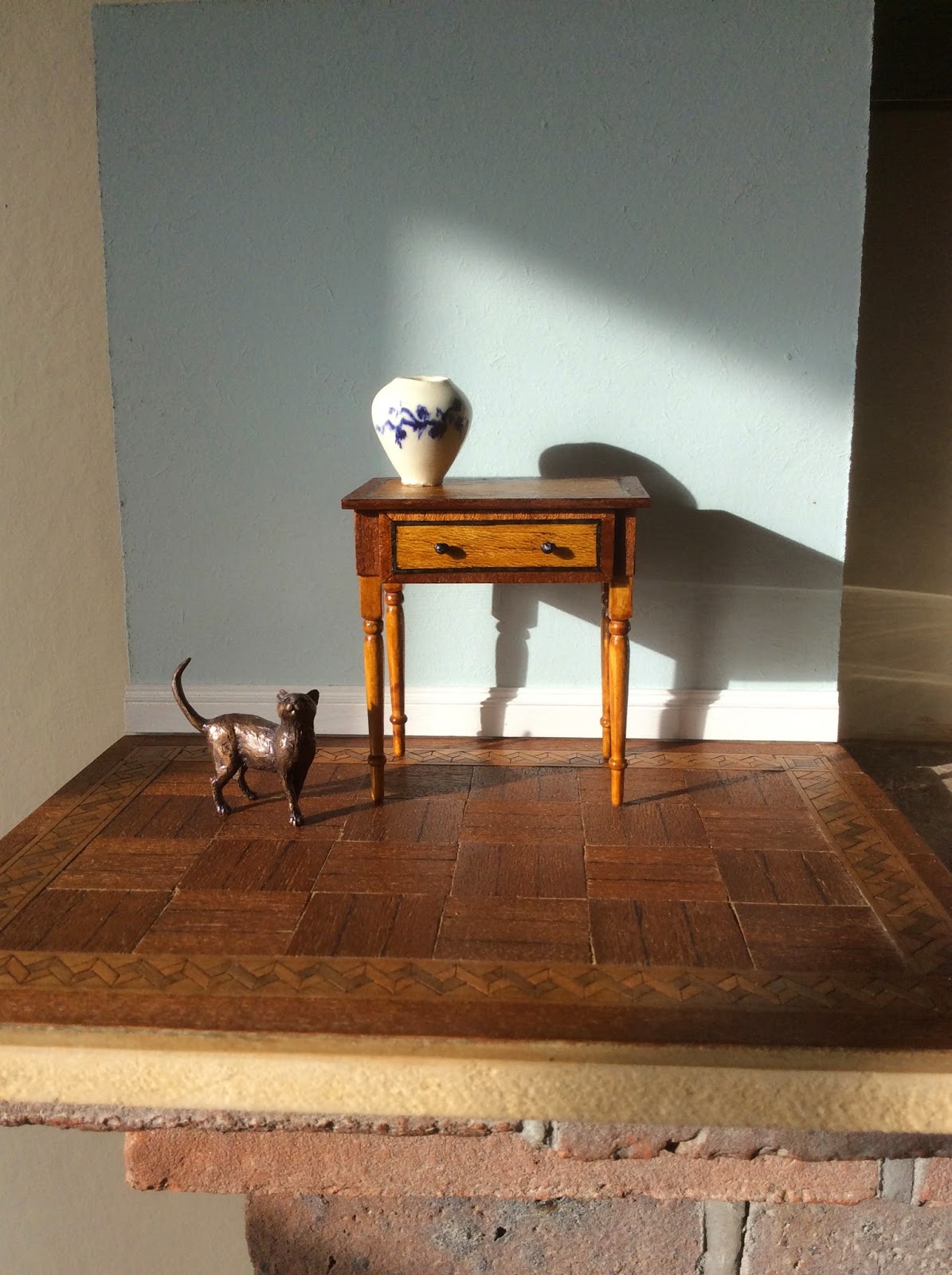 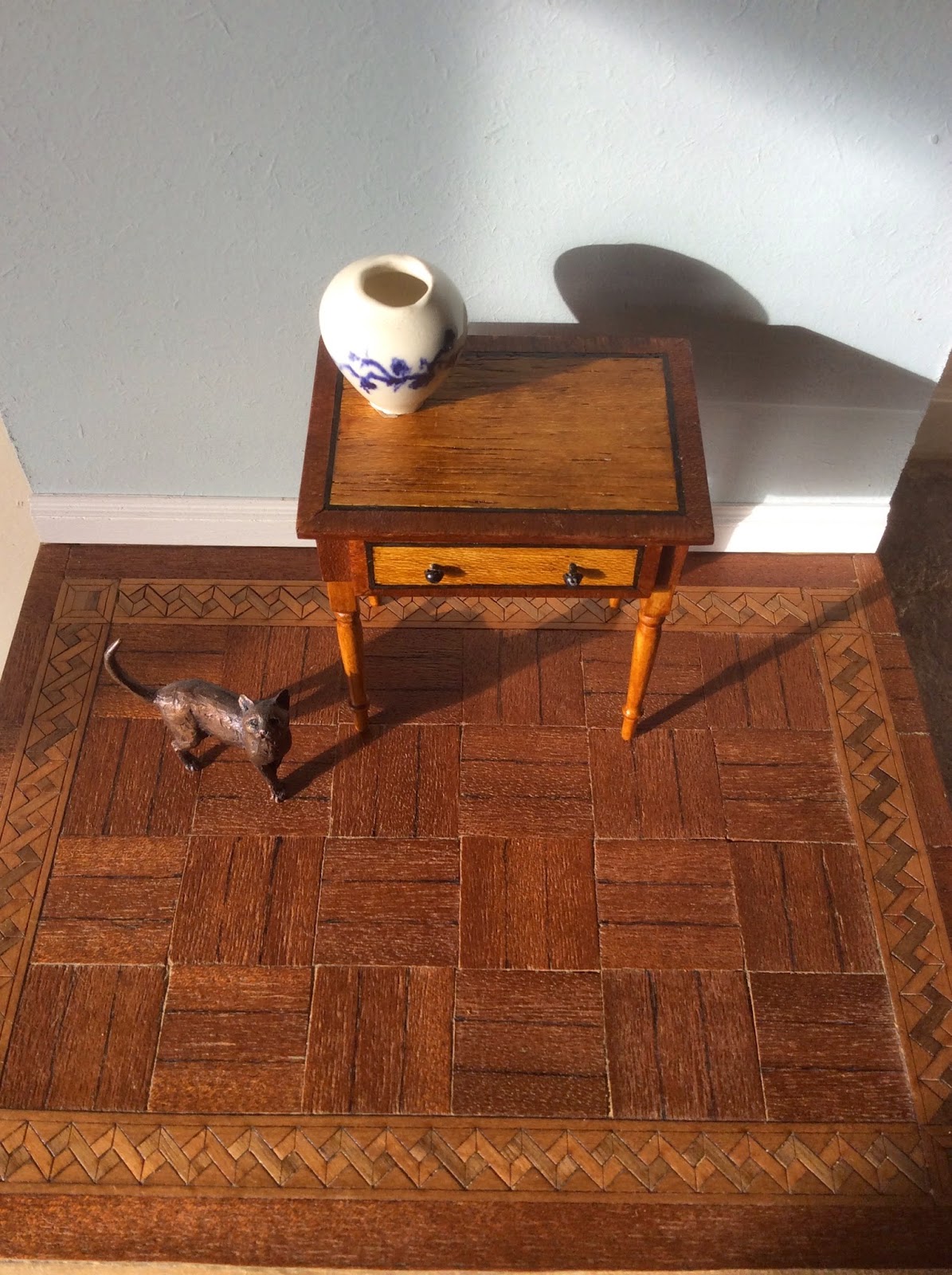 This table is for one of our members who couldn't join us for this project! Sorry Anne W. you can't have my little bronze cat. It's too small really for 1/12th scale, but I love it anyway.  No doubt Anne will dress this up properly!

A very long time ago (it seems to me) I agreed to do a class on veneering and stringing. I tried out several different tables. Some too ambitiously complicated or just to expensive to realise. I would have liked an opening hinged table with compartments, like a worktable my grandmother had. But in the end 2 club afternoons is just 4 to 5 hours!

In the Christmas holidays I cut all the parts and with some help from my eldest son we sorted everything into brown envelopes and then cut some spares (wish I'd thought of that as I cut the kits) and on the second Thursday in January 16 club members started their projects. A few will hopefully start next month. or I'll have some to make myself. 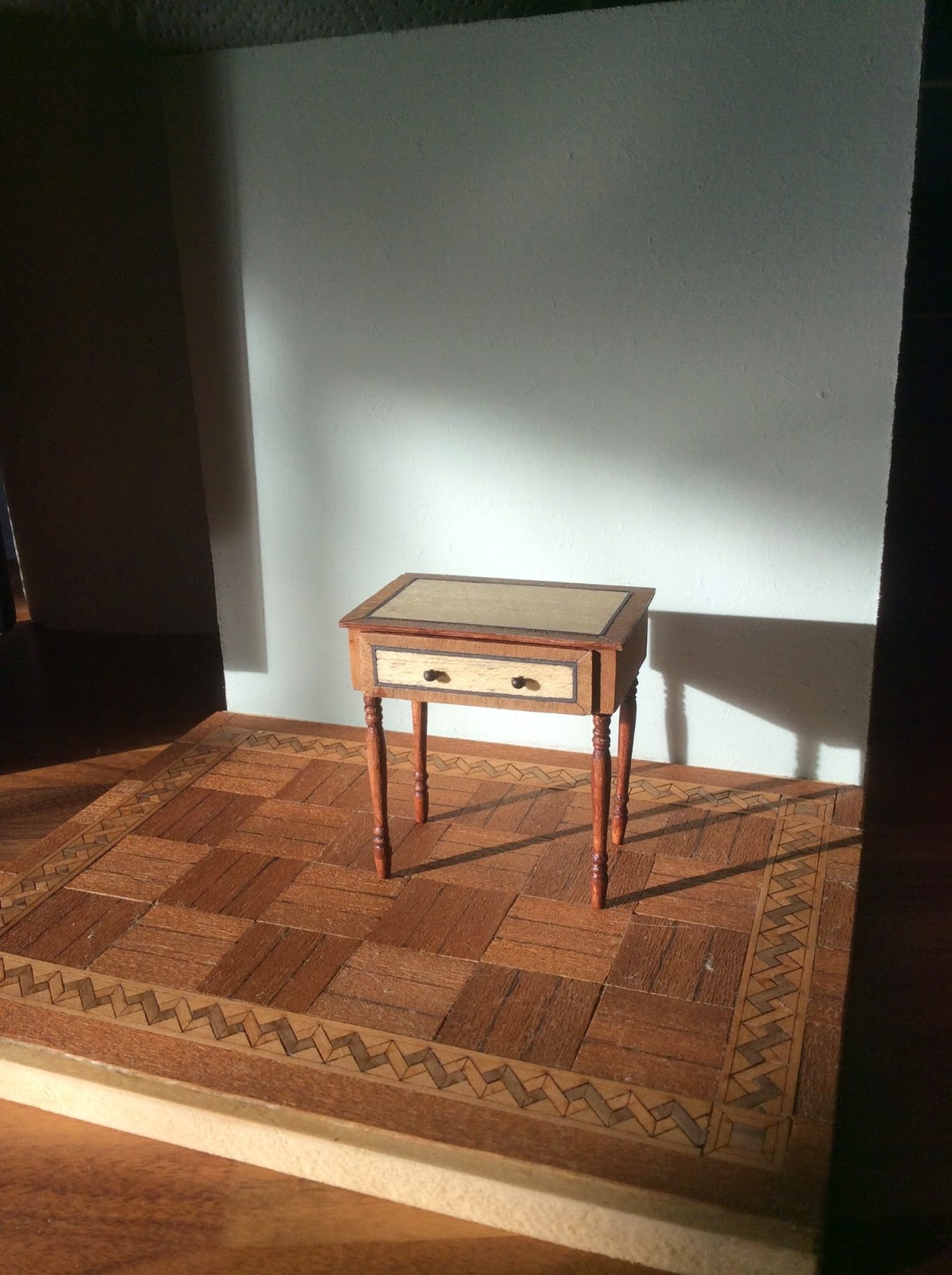 This is the prototype I made. I would have done tapered legs, but cutting 80 of those just seemed a bit too much at 4 or 5 cuts each. Just imagine how long that would take...

The legs are from an online shop and I got a discount because I needed them for a club class. I noticed he was based in a town near here, and as I had forgotten to order then earlier I emailed and thankfully he had them in stock. I suppose not many people ask for 20 packs of 4 table legs and want them next day. The gods were with me as the owner turned out to be a parent at my school and had run a class for our club a few year ago.  I received a neat package on Monday having order on the Sunday before the class. Still not sure how I failed to notice that the kits didn't include any table legs....
Here are some photos of the progress- eh mess? - we made in January. 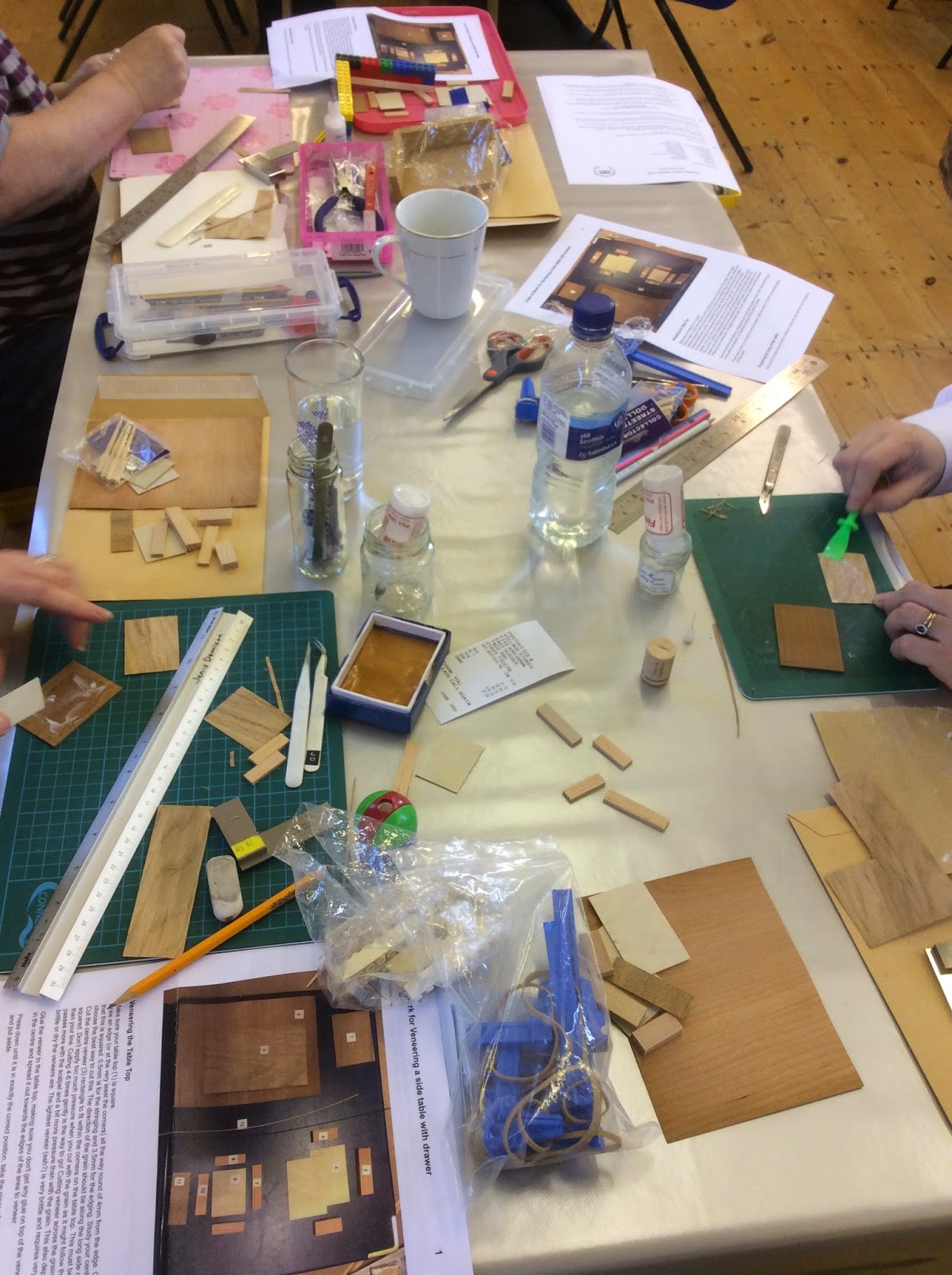 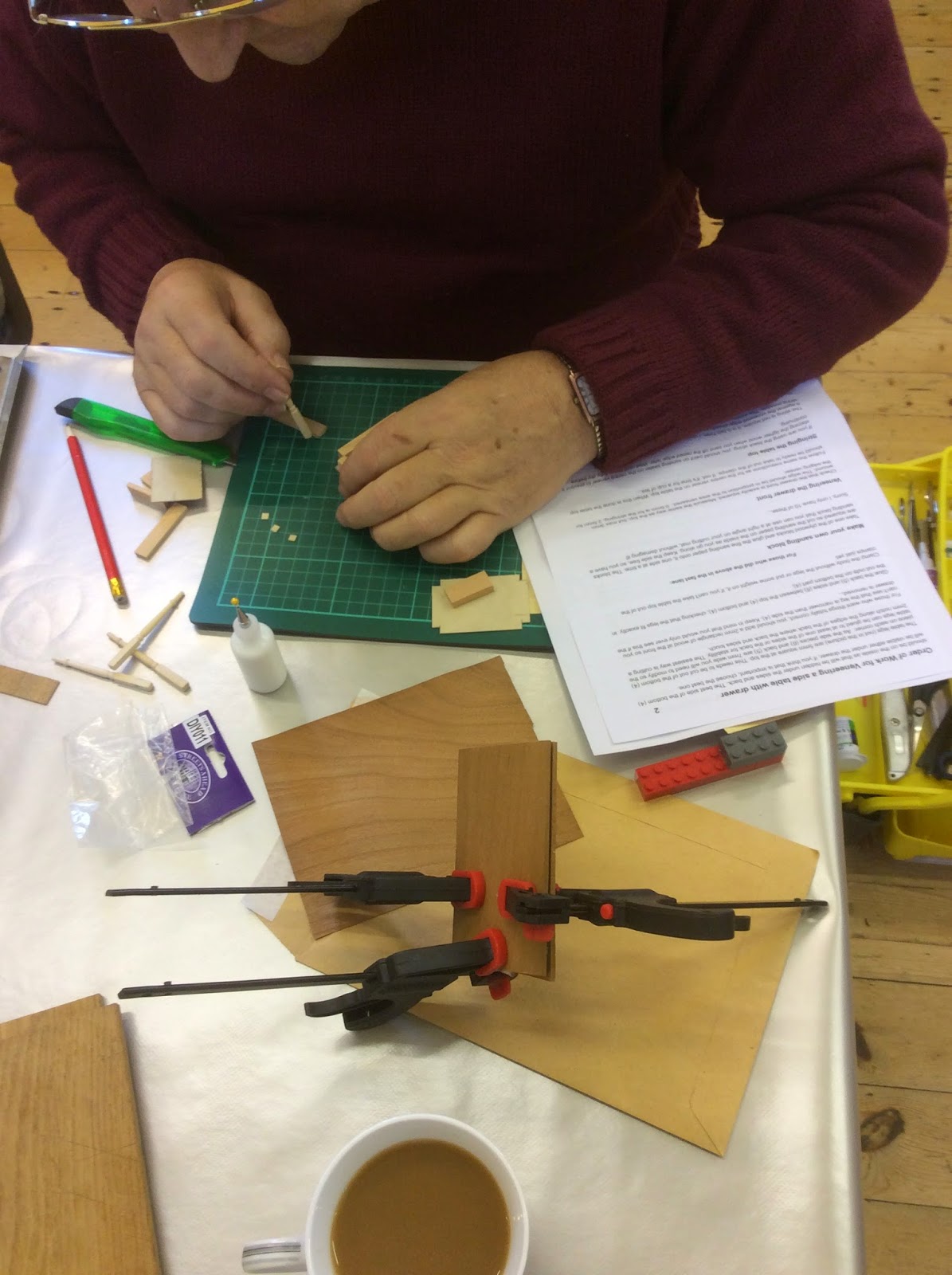 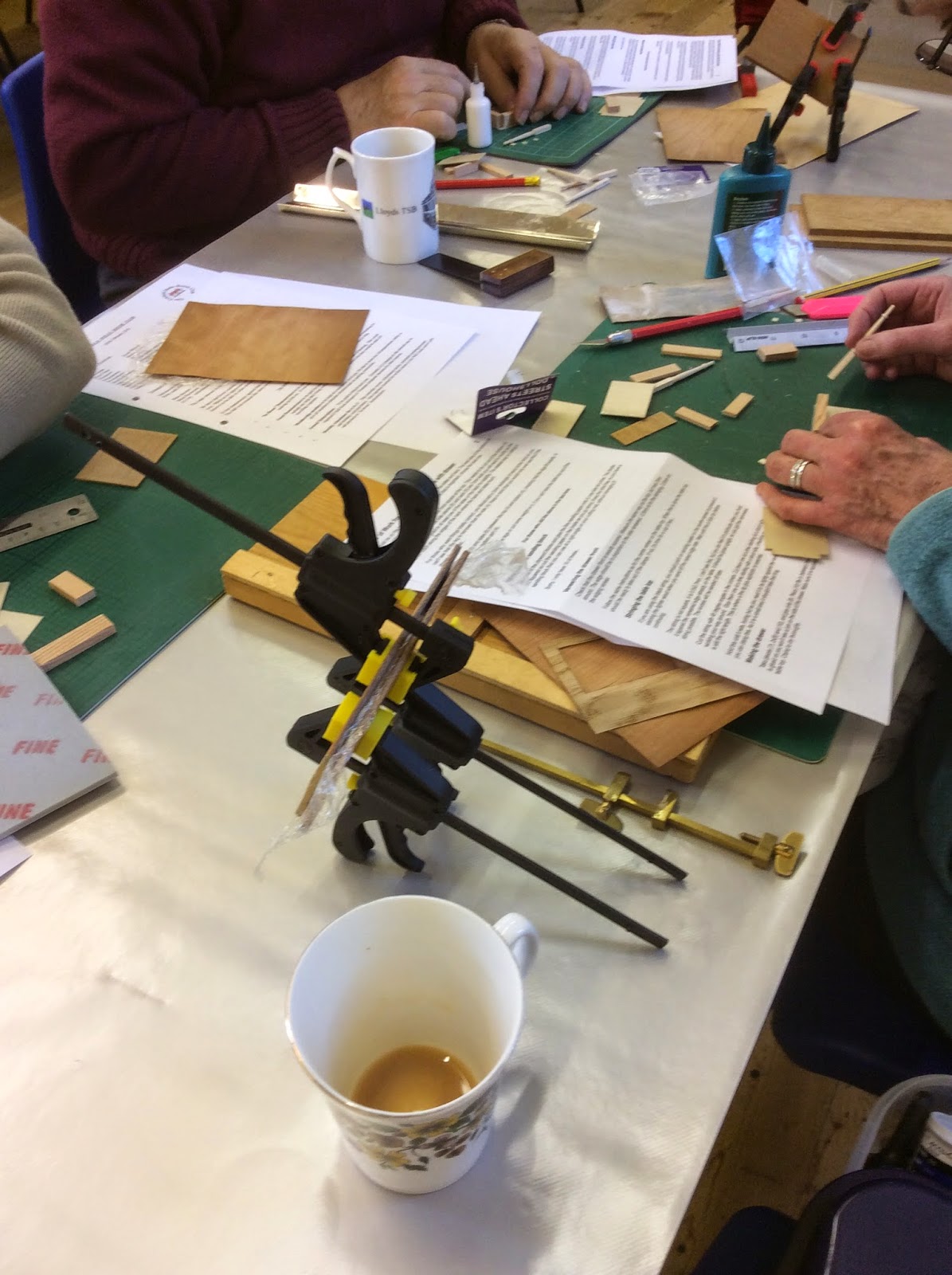 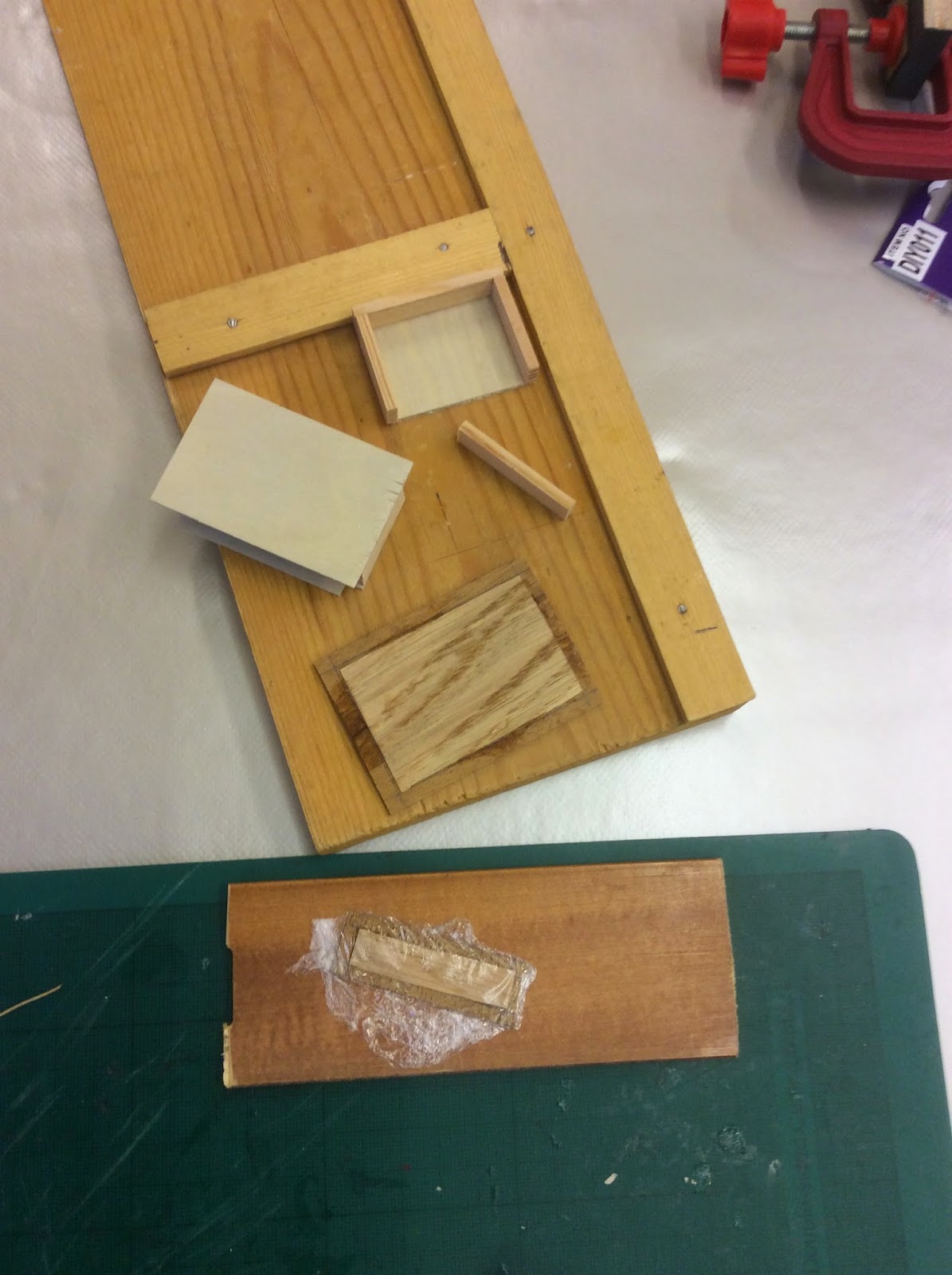 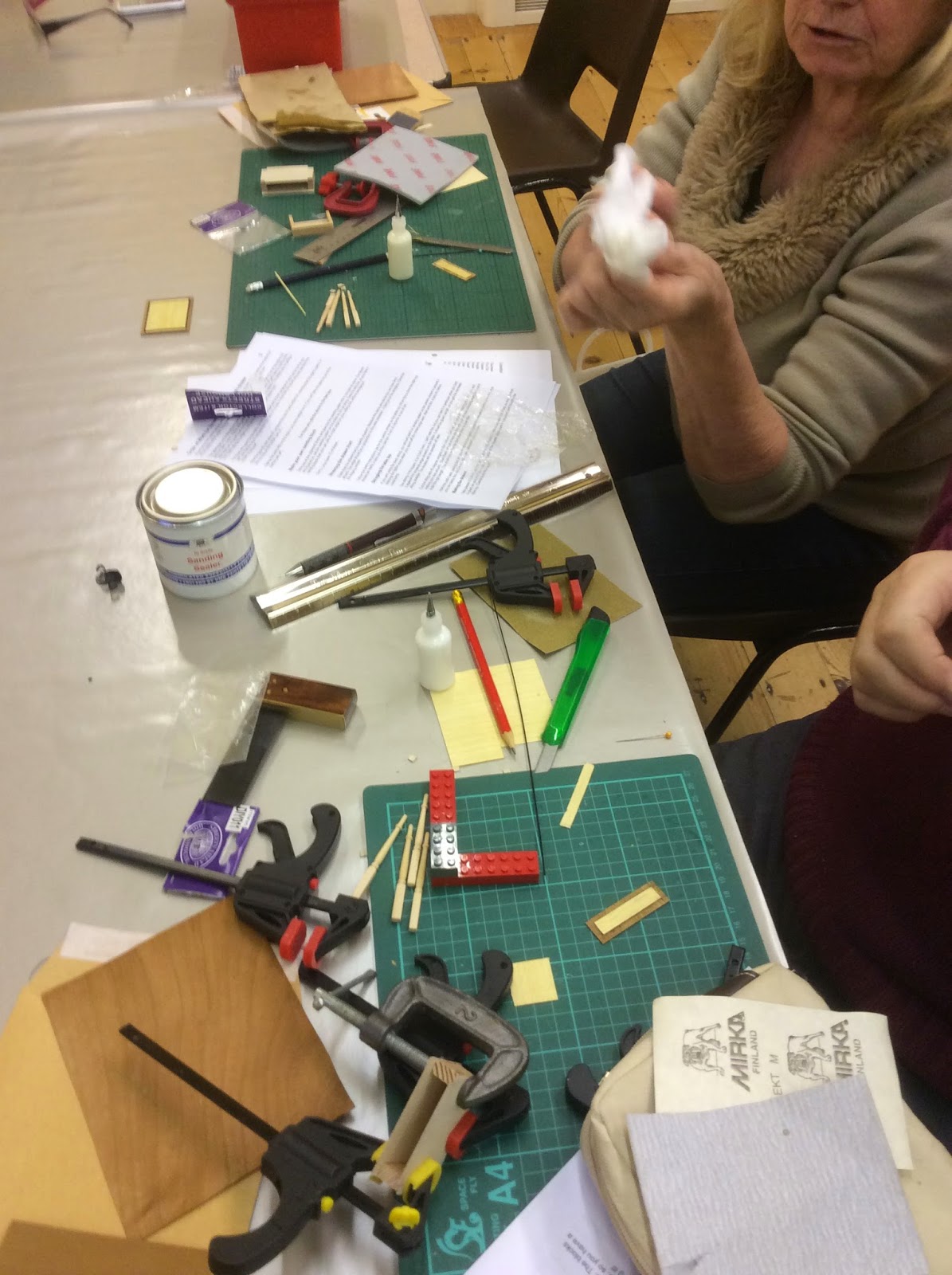 I only took these photos about half way through and failed to notice that some left early, but by the end of the afternoon most had finished the centre veneers on the table top and the drawer front, the table body and the drawer and some were working on the stringing.

I'm sure some members will finish the table in February, some may need to finish off at home, or at the March meeting. I hope I'll do better with taking photos in February!

Wishing everyone a great 2015! 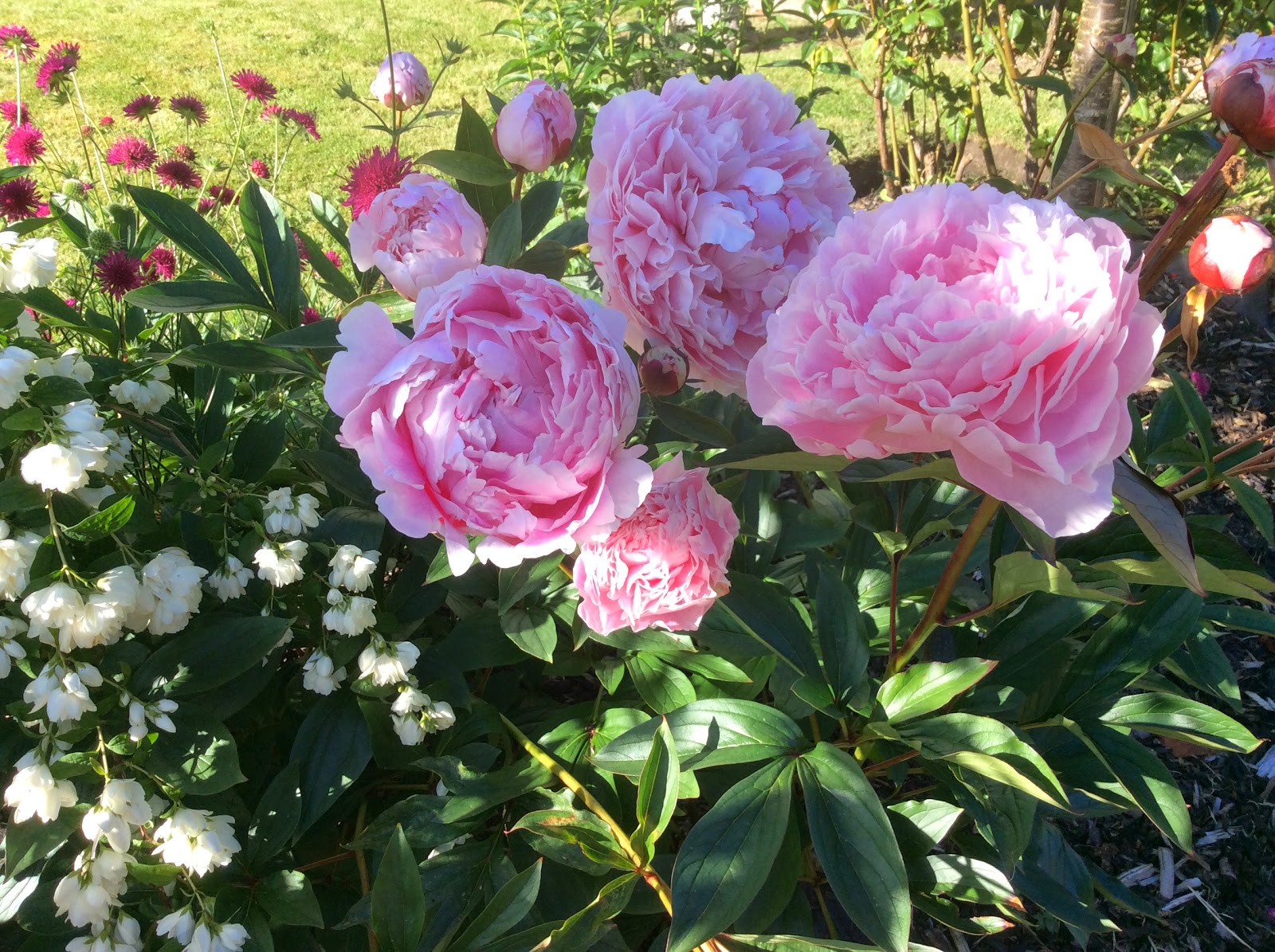 Just reminding everyone and myself what summer looks like around here!


I've not been here a lot lately, but that is because I'm running a 2 session class for our club and I've been busy putting kits together. I should get the table legs on Monday at school. It's a 1/12th scale side table with a drawer, veneered all the way round and inlayed with boxwood stringing.

Can you believe that I've spent all this time putting the kits together, sawing all the parts, sorting veneers, stringing, drawer knobs etc and I've only just realised that I hadn't ordered the table legs! Thankfully Bromley Craft Products had enough of them in stock at www.craft-products.com. He did a class for our club a few years ago.

I'll post some photos from our club afternoon,  assuming I have the time to take them....

All text and pictures on this blog are my own, unless otherwise stated and are copyrighted. Please ask permission before using any of the content and always include a link to my blog.